President Reagan once joked, “The nine most terrifying words in the English language are: “I’m from the government, and I’m here to help.” He said in his first inaugural address that “government is not the solution to our problem; government IS the problem.” Maybe sometimes, but not always. Actually, the federal government has consistently driven the kind of innovation that will be needed to get us to the Future Perfect. And governments at all levels have had more than four decades to up their game since President Reagan’s memorable lines.

The U.S. government initiated the internet and GPS and nurtured them until they were ready to be turned over for commercial use. The federal government runs national labs and finances research that provide many of the breakthroughs in energy and medicine, including those that led to the sequencing of the human genome and to the remarkably rapid development of vaccines for COVID-19. The Department of Defense’s DARPA arm’s Grand Challenge sparked work on autonomous vehicles that’s transforming transportation. The CIA financed a satellite map- ping effort that was eventually sold to Google that became the core for Google Earth and contributed capabilities to Google Maps, where you may get most of your directions these days. The CIA’s World Factbook was the core set of data that got Wikipedia launched. A Navy project provided the basis for 3-D printing. And so on.

In fact—sorry, President Reagan—the federal government has to drive the Future Perfect. The sheer scale of the problem and of the resources that have to be applied against it will absolutely demand the government does so. The Bill & Melinda Gates Foundation has the biggest endowment in the history of the world, but drawing down the entire $50 billion endowment would cover the education budget of California for about six months. One state. One budget item. Half a year. For the biggest foundation ever.

Businesses have far greater resources than foundations do, and they’re the engine of our economy, but businesses are looking for returns for themselves, not necessarily for society. Why would a business ever have invented the internet or GPS, given that the benefits accrued to everyone and couldn’t be captured just by the company that made the heavy initial investment?

We see businesses developing new modes of transportation, breakthrough sources of energy, and so on that will enable the Future Perfect, but we see government seeding many of the efforts and shaping them—before businesses take over. No, we’re not advocating central planning. What we’re saying is that government can: define a direction (on, say, climate change); supply a key tool (as it did with the internet and GPS); or even state a goal and attach a prize to it (à la the $1 million that generated so much early work on AVs); and then turn the work over to the many businesses that will see ways to make boatloads of money and will compete like crazy to get there first.

To get us headed toward the Future Perfect fast enough that we can hit our goals by 2050, we imagine governments at all levels, from federal down to the tiniest localities, taking a broad variety of actions. Government can do a lot by setting smarter rules—for instance, for our health care system. It can also stop doing some things, including regulation, that get in the way of progress. But the federal government, in particular, will have to pony up some big bucks—as long as the Gates Foundation ran out of money paying for those six months of education in California—to drive both the supply and demand side of innovation.

No, we don’t think President Reagan’s famous line from his first inaugural address about how “government is the problem” is the end of the debate. Yes, we’ve all had our frustrations with government, and even those at its highest levels acknowledge it can do far better. But government has historically played a huge role in producing breakthroughs in science, medicine, business, and more. And government can do so again as we try to move to the Future Perfect. It must.

We prefer a different quote from President Reagan in that inaugural address: “[America is] too great a nation to limit ourselves to small dreams.” 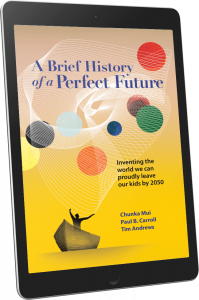 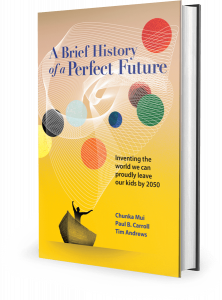 What Parents Can Do

What Individuals Can Do

What Companies Can Do

Write a Future History for our Sequel